Who’s Who in The New Tales of Gisaeng

I’ve just had a short K-drama break, but now I’m trying to get up to date with the weekend drama now airing on SBS, New Tales of Gisaeng. The story is about a modern day gisaeng house and this appealed to me – mixing modern life with the traditional gisaeng element. I’ve watched the first ten episodes and so far I’m enjoying this drama. There are some quirky elements to it, but I’m liking the romance that’s building between the two main characters Da Mo and Sa Ran. There are lots of new faces in this drama and at times some of the acting seems a little stiff, and sometimes the humor interludes seem a bit odd to me. But I’ll look more into that later. So far we are learning about the intertwined relationships of the characters so there hasn’t been that much about the lives of the actual gisaengs yet. But I’m guessing there will be more of that to come.

Anyway, here’s an overview of the families involved in the story and a little bit about the plot and characters. Everything revolves around three families and a gisaeng house. 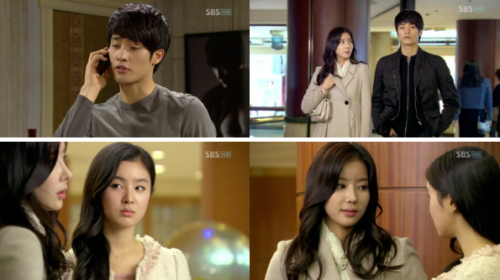 Ah Da Mo is the son of  a rich family. (top left) He begins to date Dan Sa Ran a poor dance student. (top right) But Sa Ran’s friend Ra Ra likes him too. The couple date in secret so what will Ra Ra say? (bottom left)

Sa Ran is a traditional Korean dance student. She lives with her father and step mum and step sister , Gong Joo, in a small flat. Sa Ran’s dad and step mum are very lovy-dovy in public and like to call each other the nicknames “Charles” and “Diana”. Sa Ran is mortified about this and feels embarrassed by their behaviour. She is  polite to her step mum but not warm as they are obviously very different kinds of people, and she has not got over her mum’s death yet. Her step mum is materialistic and keen to make sure that the girls marry well. Sa Ran’s step sister Gong Joo’s close friend Son Ja comes to live with the family too after his grandmother dies. As they are not wealthy, Sa Ran’s step mum gets a job as a kitchen assistant at the gisaeng house to help support the family. (In K-dramas poor people always sit on the floor on cushions at low tables and in rich homes they always sit on chairs. See below pictures..)

Sa-Ran is pretty and elegant and is invited to dance in front of one of her dance teacher’s friends. She goes to her house where she meets the lady’s grandson Da Mo. Sa Ran is realistic about her family situation and shows no interest in this rich young man. But she meets him again later when she goes on a group date with her friends to meet some eligible young men (although she says she has no interest in marriage yet). One of the other  men is interested in her but goes off her when he hears that she comes from a poor family and her parents are not well educated. He is surprised to hear this since Sa Ran herself comes across as refined and she has rich friends. 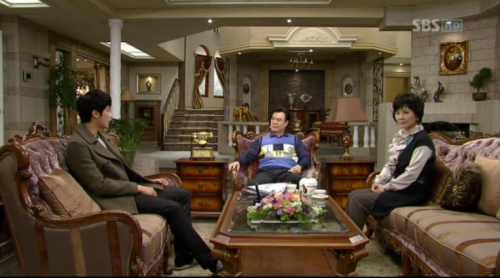 Da Mo with his mum and dad

But Da Mo has become interested in Sa Ran too and does not seem put off by her background.  But he is off-hand and arrogant. Maybe he is used to girls falling at his feet. Sa Ran, however, seems unimpressed at first and is cold towards him. Da Mo is not happy at home and resents the fact that his dad pays more attention to the family dog than he does to his wife and son. He feels like he can’t do anything right and is frustrated at the way his dad treats his mum even though she does everything she can to try to please him. Da Mo’s dad is the CEO of a large company.  His grandmother  often wears a traditional hanbok for daywear which is unusual these days as they are usually only worn for special occasions.

Sa Ran’s friend Geum Ra Ra lives with her well-to-do parents and grandparents. Her father is a doctor and has his own practice. Her mother is the owner of the gisaeng house although she does not spend any time there and wants to close it down. Like Da Mo’s family, they seem to embrace tradition as Ra Ra’s grandfather also usually wears a hanbok. But Ra Ra is spoilt and superficial. She is concerned about her looks and not much else! She thinks she is pretty and even asks her mirror on the wall if she is prettier than her friends! One day while she is in  a cafe with her friends she gets irritated and jealous when a lady (from the gisaeng house) spots her friend Sa Ran and asks her to call her about dance classes because she is so pretty and elegant. Ra Ra likes to think that she is the prettiest of them all. When she meets Da Mo at the group date, she decides that she wants to date him. But he is not interested in her and secretly starts to date Sa Ran instead.

Ra Ra’s uncle and aunt live nearby and turn up when they want something from Ra Ra’s grandfather. Now they want money from him even though they are already financially well off. Ra Ra’s aunt is very materialistic and Ra Ra’s grandfather does not want to give them any more money. But  they have a hold on him. So when her aunt doesn’t get her way she resorts to emotional blackmail. She knows a family secret and she threatens to reveal it.

The gisaeng house: The Gisaeng house is run by Oh Hwa Ran. And her mother lives at the gisaeng house too.
In some way all the families will have something to do with the gisaeng house. Sa Ran is approached to work there and she takes her friends to meet the ladies who run the house. She turns down their offer at first but she will probably not be able to make much money as a traditional Korean dancer. It’s a hard life in the gisaeng house though. The ladies have to work late into the night entertaining guests. It’s not a cheep establishment and only invited guests can go there. So there is a lot of pressure for everything to be perfect for the guests. The food must be made just so for their taste and the gisaengs must be accomplished in various arts. They have English classes and music lessons although we don’t see much of this yet.

The head chef of the gisaeng kitchen is Han Soon Duk (She was also in Dong Yi and was Dae Jang Geum’s mother. It looks as though her kitchen skills from Dae Jang Geum have come in handy here.) She is a good chef but there is a sadness about her. She has a limp and every week she goes to pray at a temple. The other ladies wonder why she needs to do that as she has led a pure life. She is not married and they believe she has no children. So what worries could she possibly have? But of course there are secrets to be discovered. And although Soon Duk has worked at the gisaeng house for many years nobody actually knows anything about her past. She often goes to stand outside Ra Ra’s house. She watches Ra Ra and her father with tears in her eyes but she hides so that they can’t see her.

There are three very different men who live and work at the gisaeng house and they share a small room sleeping together on floor mats in the traditional way. Seo Saeng Kang is the oldest of the three men but does not seem to be trusted by the other workers at the house and he is often told off for being lazy. Some of the humour in the drama comes from his antics. Oh Bong Gi is the youngest, and Ma Dan Se is serious and reliable. The strong and single kitchen manager shows romantic interested in him but he shows nothing in return.

The staff dining room at the gisaeng house.

The kitchen of the gisaeng house. Kitchen manager No Eun Ja (centre)

There are going to be complications in the lives of the characters when the family secrets come out into the open. And in classic K-drama style some of the characters will have to start questioning their identities. The ratings for this drama seemed to be a bit low at first but it’s getting better. I’m going to persevere with it, because as well as the romance I’m interested in how the gisaeng element will be incorporated into the drama.