In the introduction to the novel Dong Yi, the author, Chong Che-in 정재인writes about the approach to writing the story. The writer had to imagine what life was like for Dong-yi’s character as the history books tell us very little about her since she came from the servant class.

All that’s known is that she was born into the chonmin class – the lowest of all the social classes during the Joseon period – and was taken into the palace as a maid to serve King Sukjong. The King took her as a concubine and she gave him three sons and the second son became King Yongjo.

Chong Che-in writes that, according to the history books, both Yongjo and his mother had a complex about coming from the chonmin class. Chong wondered how she really felt about this. Perhaps she was optimistic that the blood of low and higher classes would mix and create social equality, so Chong considered this point when writing the novel.

Social classes during the Joseon period 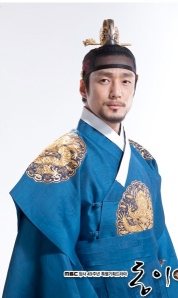 Rules about marriage between the classes seem to have changed several times during the Joseon period but apparently, during King Yongjo’s rule it was impossible for a child born with parents from different classes to move up to the higher class. Yongjo changed the law so that if a child was born to a parent from the chonmin class and the other from the higher yangin class then the child could move up into the yangin class.

I did some research, some of it here, to find out more about the strict hierarchy of social status in Joseon times to understand this story better. The drama begins in 1681, the 7th year of King Sukjong’s reign. 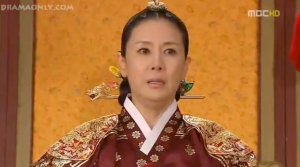 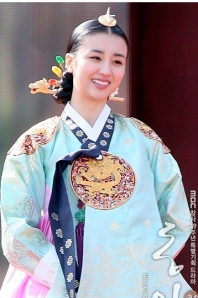 Queen In-hyeon (인현왕후) is the King’s wife. The concubines are not part of the royal family but still treated respectfully in court and addressed as mama-nim (마마님). There can only be one Queen, and she is addressed as jungchon-mama (중전마마) by those lower than her and  just jung-chon (중전) by te-bi mama and the king. 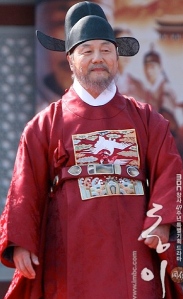 The Leader of the Southern faction Oh Tae-suk오태석

Aristocracy made up of Confucian scholars were the ruling class that ran the government and the military. They didn’t pay tax. To become a yangban one had to be male and pass a civil service exam (kwago) and there were strict rules about who could take the exam. The yangban had to lead by Confucian example and were tested on their knowledge of various subjects. Any skeletons in the cupboard – ancestors of low birth etc – would bar them from taking the exam. Children of Yangban went to private schools for yangban.

During King Sukjong’s reign there were two opposing parties within the government – the southern faction and the western faction. Very high level yangbang would be addressed as Yong-gam (영감) 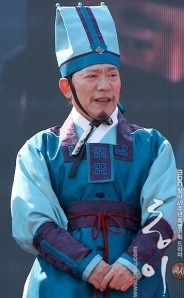 A leader at the Royal Music School

chungin were the middle class – made up of a small group of professionals who took a lower civil examination than the yangban. They included, doctors, accountants, military officers, interpreters. Some had duties designed to make sure the social hierarchy was kept in tact, such as the police officers who spent their time chasing after runaway slaves. Men in the chungin and yangban class are often addressed as nauri ( 나으리) if their level is higher than the person they are speaking to. 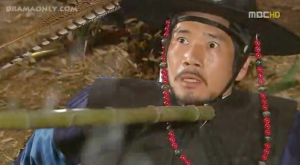 policeman gets into a fight trying to catch runaway slaves

commoners make up the largest class – include fishermen, laborers, craftsmen, peasants. Merchants were also in this class although wealthy merchants had a lot of power and influence over the local yangban (this is particularly clear in the drama Sangdo, The Merchant). They were not as respected as the other members of this class as they relied on trade, not actually producing anything. pobusang were traveling peddlers, more respected than regular merchants as they had a better reputation for being honest and were known to act as message carriers often for the King. 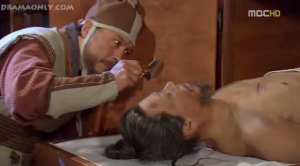 chonmin were the lowest class. They had jobs considered at the time as distasteful to Buddhist principles or frivolous to a serious confucian society – include butchers, actors, traveling dancers, shoemakers, executioners, and for a time even Buddhist monks and nuns. manshin – Shaman women had a lot of spiritual influence conducting exorcisms and expelling bad fortune and could also be fairly wealthy. Dong-yi’s dad is ridiculed by some of the policemen because  his job involves handling corpses. Convicts were also included in this class. The chonmin did not usually have surnames and could be given quite unpleasant first names too such as 개똥 (ke-dong) “dog muck” or  말똥 (mal-dong) “horse muck”. Yes, really. 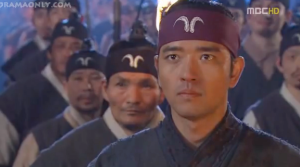 The chonmin lived in a separate community from other classes and it was impossible to move up from this class. nobi – were servants taken from the chonmin class to serve yangban and royalty, but like slaves they were considered the property of their owners and could be given away to other high ranking people.  kisaeng, female entertainers for yangban, were in this class, educated but not respected by others in society. Dong-yi’s brother and the guard Cha Chun-soo are members of the the chonmin class who have joined a group calling themselves geum-gae who try to help the poor people escape from ill treatment. 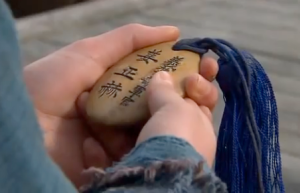 The murdered man gives Dong yi his killer's nametag before he dies.

The strict hierarchy was kept in place during the Joseon period with the use of IDs. Everyone had to carry IDs except the royal family. Generally speaking yangban had the smallest ID ivory tags, chungin had horn tags or small wooden ones depending on their status, yangin had small wooden tags, and chonmin had large wooden tags. Dong-yi si given a name tag by the dying nobleman in episode 1 of the soldier who killed him. I think he belonged to the chungin class. 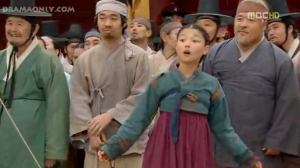 Dong yi as a child

The hierarchy was pretty rigid and moving up a class was not an easy thing to do. It was possible to move up a class by passing one of the civil exams but there were restrictions. Marriage rules between the classes also changed through the period but generally people married within their own class.

One response to “Dong Yi, social classes in the Joseon period”